Online conference
Streaming on the Museum's Facebook page and Youtube channel
info@museitorino.it
011 44 06 903
From Monday to Saturday from 9:00 a.m. to 6:30 p.m.
On Tuesday January 26th 2021, at 6pm, the Museo Egizio, in collaboration with ACME (Associazione Amici e collaboratori del Museo Egizio),  will host the online conference "The Archaeology of Mummification: A Saite-Persian Mummification Complex at Saqqara", held by Ramadan Badry Hussein.

The Saqqara Saite Tombs Project was launched as a second round of documentation and excavation to the Saite-Persian tombs located to the south and east of the pyramid of King Unas at Saqqara. While mapping the site, the clearance activities fortuitously unearthed an unparalleled complex of mummification structures dating back to the Saite-Persian Period. This complex is comprised of a room with an embalmer’s cachette, a mummification workshop, and a communal burial shaft. The complex represented the nucleus of the Saite-Persian cemetery to the south of the pyramid of Unas. The embalmer’s cachette is significant for its diverse pottery assemblage, and the large number of vessels that are inscribed with embalming instructions and names of substances. The mummification workshop is indeed unprecedented in Egyptian archaeology. The hypogeum-like burial Shaft K 24 is remarkable for its several tombs and loculi, which provide insights into the socio-economic background of people buried therein. In fact, this Mummification Complex opens a new avenue for research on what Hussein himself calls "the Archaeology of Mummification" in ancient Egypt.

Ramadan Badry Hussein is currently the Director of the Saqqara Saite Tombs Project at the Institute of Near Eastern Studies at the Eberhard Karls Universität, Tübingen, Germany. He first studied Egyptology at Cairo University from 1990-1994, then worked as inspector of antiquities at Giza and Saqqara for seven years. During this time, he received training in archaeological methods and participated in the excavations of the Egyptian Ministry of Antiquities in Giza, Saqqara and Baharyya Oasis. He was admitted to the PhD program of Egyptology at Brown University in 2001. At Brown his research for the Master’s and Doctoral degrees focused on the ancient Egyptian language and religious texts. During his matriculation at Brown University, he taught classes on Egyptian History and Language, and the ancient cultures of the Nile Valley for the Egyptology Department at Brown University and for the Anthropology Department at Rhode Island College. From 2003 to 2006, he joined the excavation project of Brown University-Cairo University at the Cemetery of Abu Bakr at Giza. On this project, he participated as area supervisor and later as Deputy Director.
He returned to the Ministry of Antiquities in June 2009, and was put in charge of the Center of the Documentation and Study of Egyptian Antiquities. He was also appointed as the Managing Editor of the Publication Department, and finally the Chief of Staff to the Minister of Antiquities in April 2011. He has received international research grants and awards for his projects, such as the Alexander von Humboldt Research Fellowship.

The conference will be held in English and will be introduced by Christian Greco, Director of the Museo Egizio. 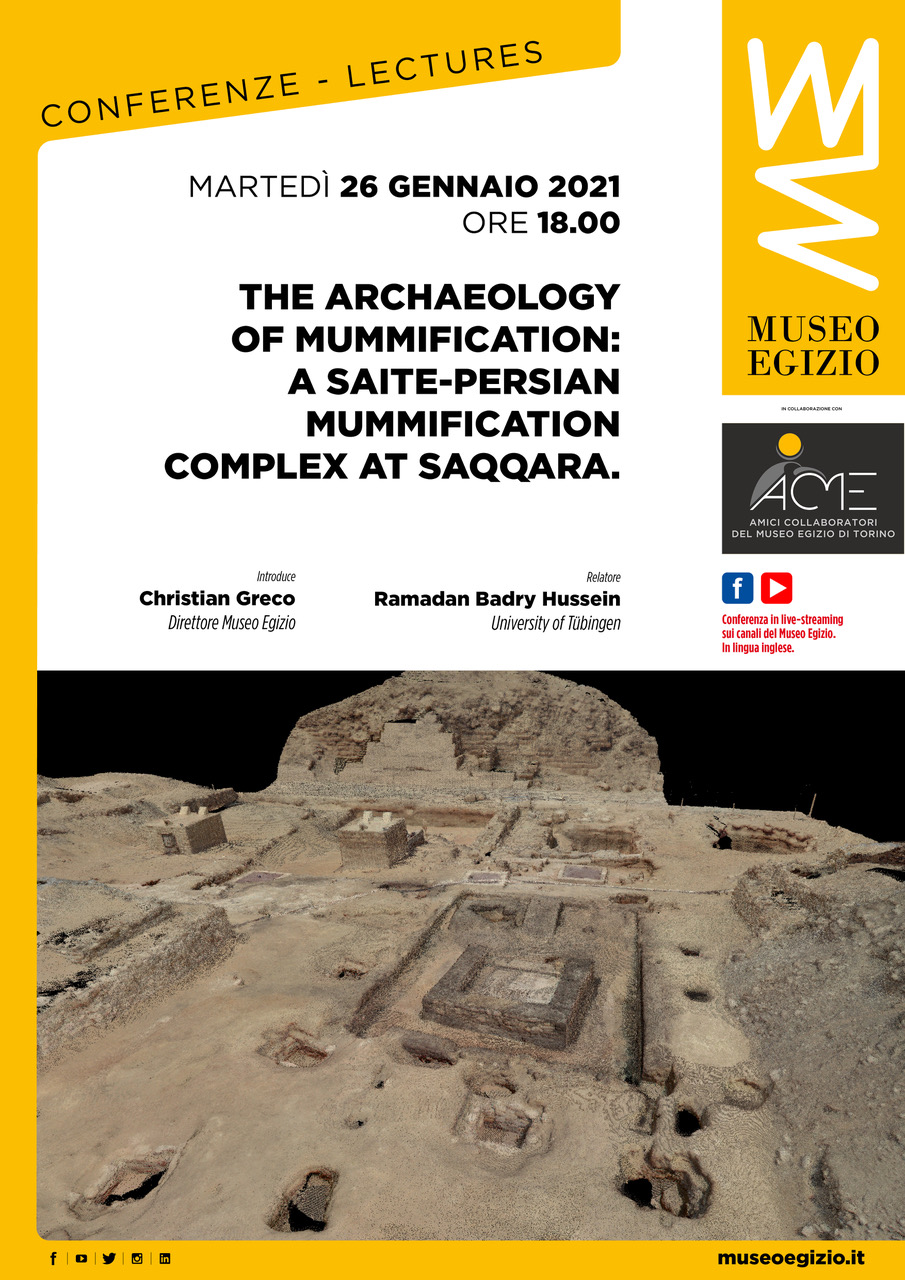