Hello, my name is Lyla Pinch Brock. I am a senior member of the team here at Saqqara; I have been on site for almost twenty years. I am a jack-of-all-trades archaeologist and have worked in Turkey, Yemen, Crete and mainland Greece as well as Egypt. Most recently I directed the restoration of the pink granite sarcophagus lid of queen Takhat in KV 10 and recorded the extensive decoration.

I specialise in drawing whatever comes up during an excavation. The Leiden-Expedition to Saqqara appreciates having drawings of our finds as well as photographs because each one provides different information about the object. I work closely with our photographer, Nicola Dell’Aquila and our photogrammetry specialists, Alessandro Mandelli and Andrea Pasqui.

While us seniors cannot leap gazelle-like around the excavation like the other younger team members, we do bring experience that can be valuable in terms of knowing what should or can be done in certain field situations. 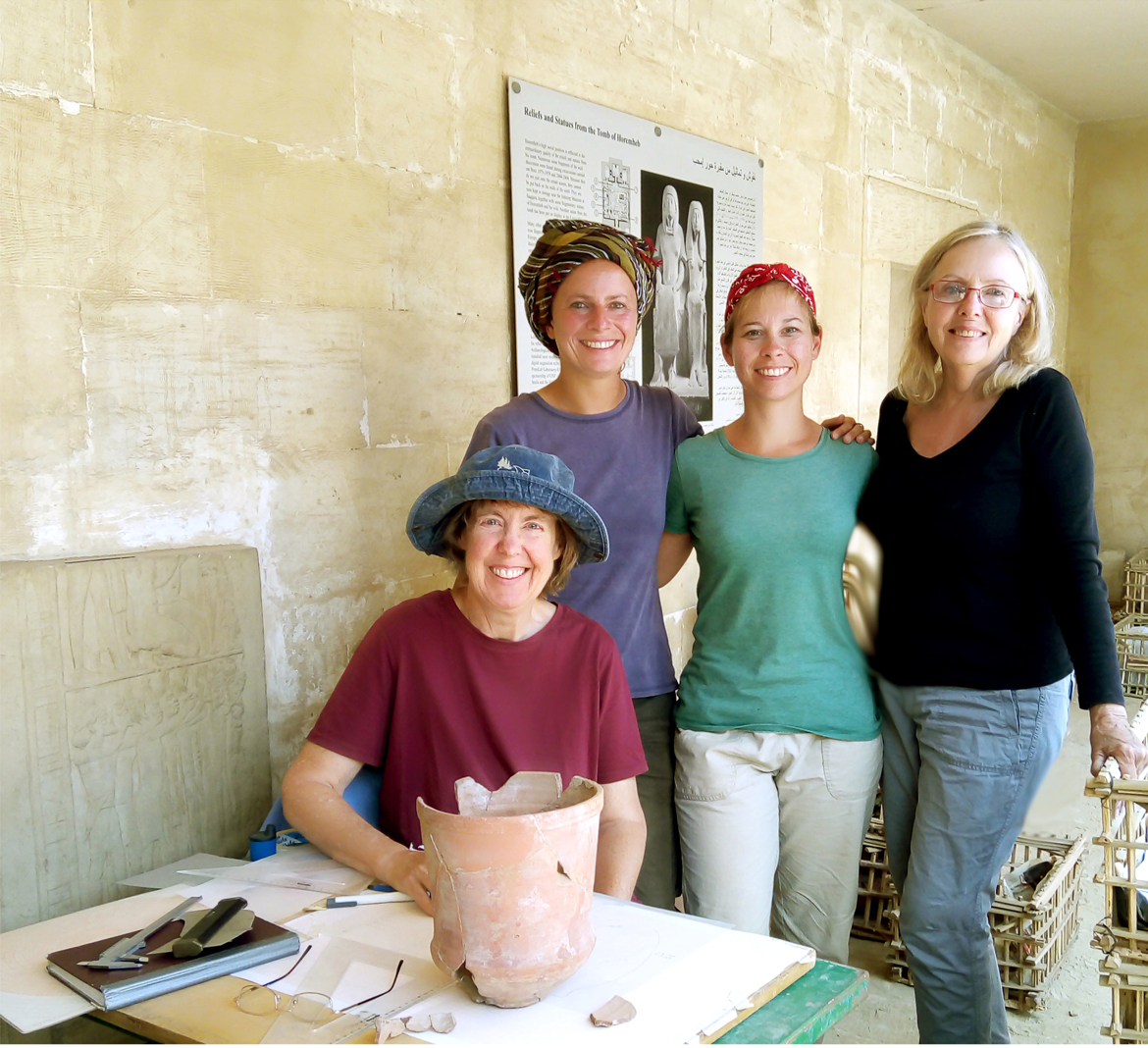 We are having a catch-up season because we have missed so many due to the Covid crisis. Many granting agencies, like the Friends of Saqqara, have helped us put this season together. Normally we work in the late winter to early spring but this time we are dealing with the sometimes penetrating heat of September and October. There is a large crew here and MEHEN has kindly helped us with a grant to accommodate us outside of the full dig house for a week. I am wearing two hats this time – helping our ceramics specialist Barbara Aston prepare the pottery plates for the forthcoming publication by Maarten Raven, Five Tombs - and thanks to a grant from The Amarna Foundation, I am doing detailed illustrations and architectural drawings of a wonderful Chapel that we found on our site in 2019. 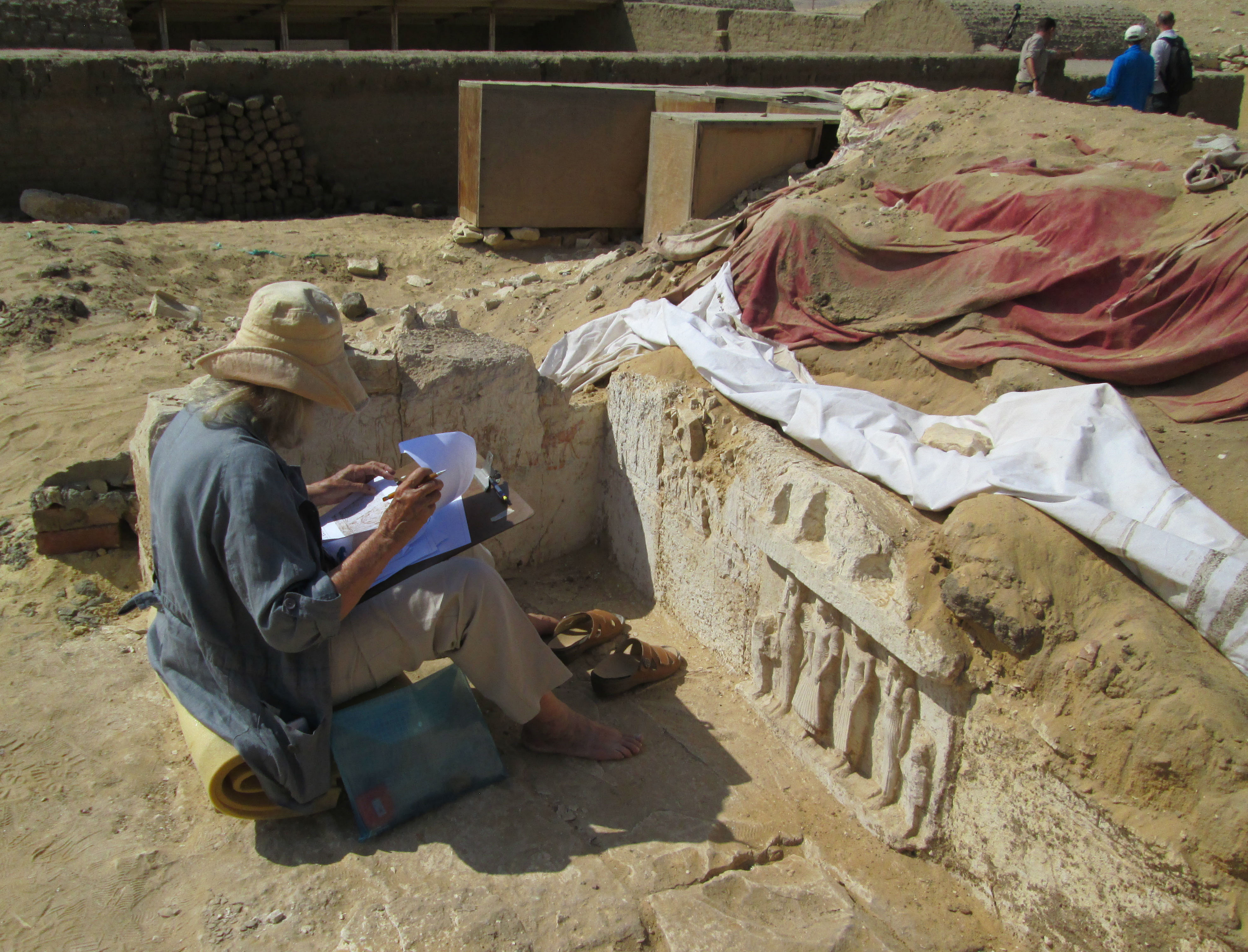 Caption: At work on site copying the family group.

The owner of the Chapel is unknown. The building is made of poor-quality limestone and is attached to a larger structure. It has three walls and probably once had two pillars; only the bases of these remain. It would have been a place for visitors to leave offerings for the deceased. Although it is small, only about two meters by three, the Chapel is very special because in the center of the back wall, at floor level, there are six figures carved in the round in extremely fine detail, almost perfectly preserved. Such decoration is normally only found on stele. The figures probably represent family members: There are two women flanking two men with their arms wrapped around their shoulders, and perhaps two children, one on each side. The men’s costumes are different, the one on the left wears an elaborate full-length pleated garment and wig, and the one on the right is bald and wears a long kilt. Every detail is minutely carved, even down to the toe and fingernails. We asked our conservator, Madame Basma, about cleaning the dust and accumulated dirt from the reliefs and she is studying them to see what can be done. She indicates, while probing delicately with a cotton swab, that there is more colour there than is readily visible, and we are glad to hear that. To the left of the family group is some incised relief showing mourners and offering-bearers, and there is a bit of miniature cavetto cornice on the right, but whatever was once below it is now gone. 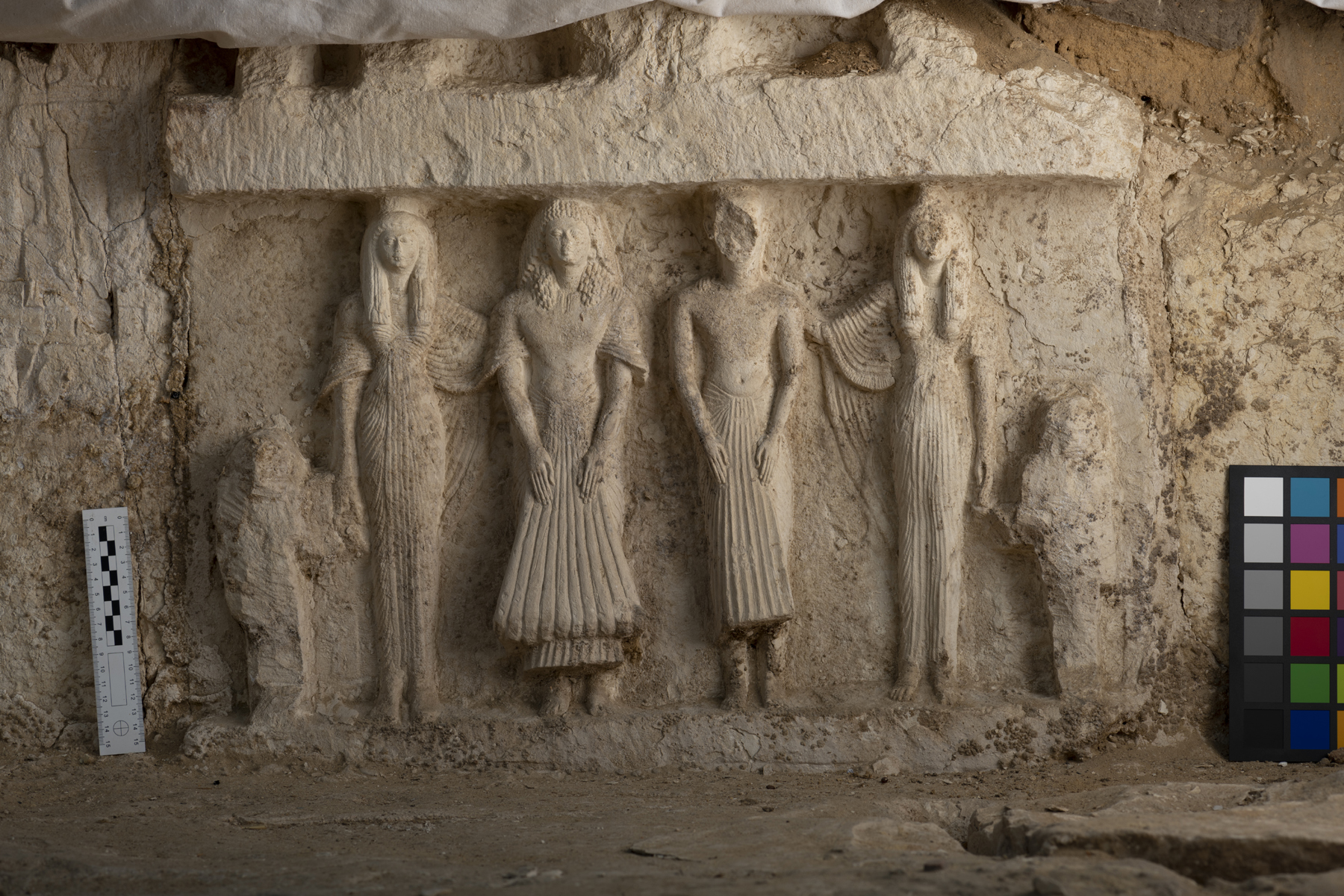 Caption: The family gets their group photo.

Aside from applying a hardening material to the limestone, we are considering producing a three-dimensional copy using photogrammetry. But for now, the obvious choice to protect it on site is replace the permanent covering made of sheets of plastic, plywood and fired brick with a studier structure composed of limestone blocks and mortar. Certainly, preserving this Chapel, like all of Egypt’s monuments, in a time of global warming continues to present a real challenge.

We look forward to seeing you next Friday for a new digging diary!