My name is Tomasz Herbich, I specialize in non-invasive archeology, i.e. I try to find archaeological structures invisible on the surface in a way other than through excavations. For this purpose, I use geophysical methods. I already worked in Egypt in the 1980s. I have been working in Egypt every year since the end of the 90s. Until now, I have conducted research on over 100 sites, both in the Nile valley and in the Delta, in oases, and on the shores of the Mediterranean and Red Sea. I work at the Institute of Archeology and Ethnology of the Polish Academy of Sciences in Warsaw.

In Saqqara, I conduct research using the magnetic method (see fig. 1). I am accompanied by Mr. Konrad Jurkowski, a graduate of archeology at the Jagiellonian University in Krakow (fig. 2). The method is based on the observation of changes in the intensity of the Earth's magnetic field and allows you to register objects that create their own magnetic field, located no deeper than 1-2 m. The magnetic method has been successfully used in Egypt for nearly 50 years. Initially, it was a very labor-intensive method - by taking measurements in a sampling grid of a density one measurement per one square meter, it was possible to examine an area of 1000 m2 during the day. Since the end of the 1980s, after the introduction of instruments with a short measurement time and automatic recording of the data in the memory of the instrument, the survey can cover an area ten times larger during the day, with a much denser measuring grid (8 measurements per square meter). 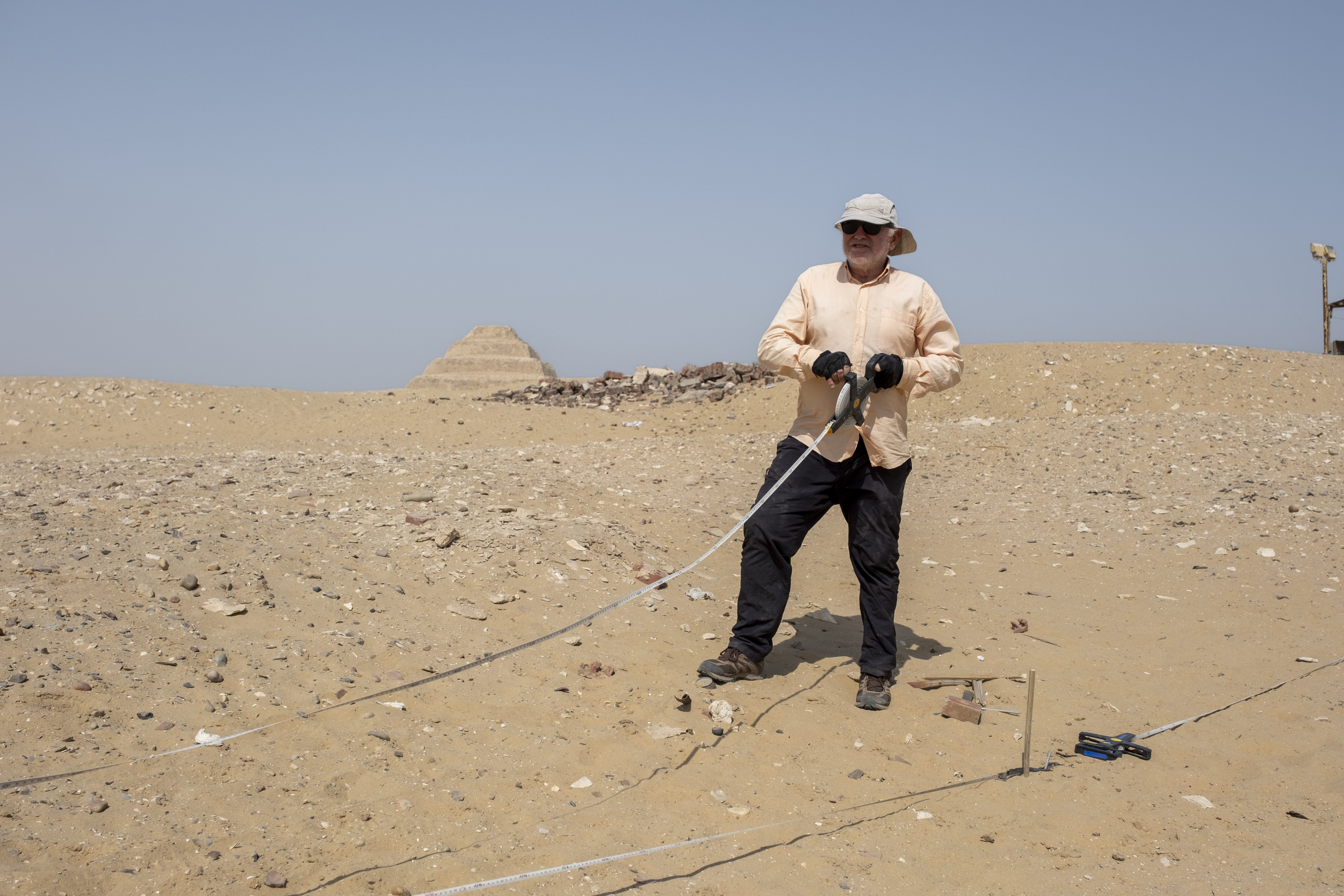 Caption: Tomasz at work in Saqqara. In the back Alessandro Mandelli works on the Total Station.

The effectiveness of the method is due to the fact that the basic building material throughout the history of Egypt was sun-dried brick, made of Nile silt. Nile silt contains iron oxides, which causes that the magnetic value of mud brick walls is usually different from the surroundings. The magnetic method also allows you to register objects such as kilns and hearths, clusters of ceramics, walls made of burnt bricks.

Starting the geophysical prospection in the New Kingdom necropolis in Saqqara, we are involved in a series of research conducted in the Saqqara area since the mid-1970s. The research was initiated by the Czech mission with magnetic and electrical resistivity measurements in Abusir. The research led to the finding of a complex of tombs from the Late Period. In the 1980s, the research was conducted by the Polish mission. It led to the discovery of graves from the Old Kingdom to the Late Period. The largest survey in terms of area was carried out by the Scottish mission, led by Ian Mathieson. As a result, the limits of areas with tombs in the area from southern Abusir to the area of the New Kingdom necropolises were estimated. Last year, the Czech mission resumed geophysical research. As a result, a detailed plan of the necropolis was obtained, lying along the border of the desert and the Nile valley, at the base of the desert plateau. 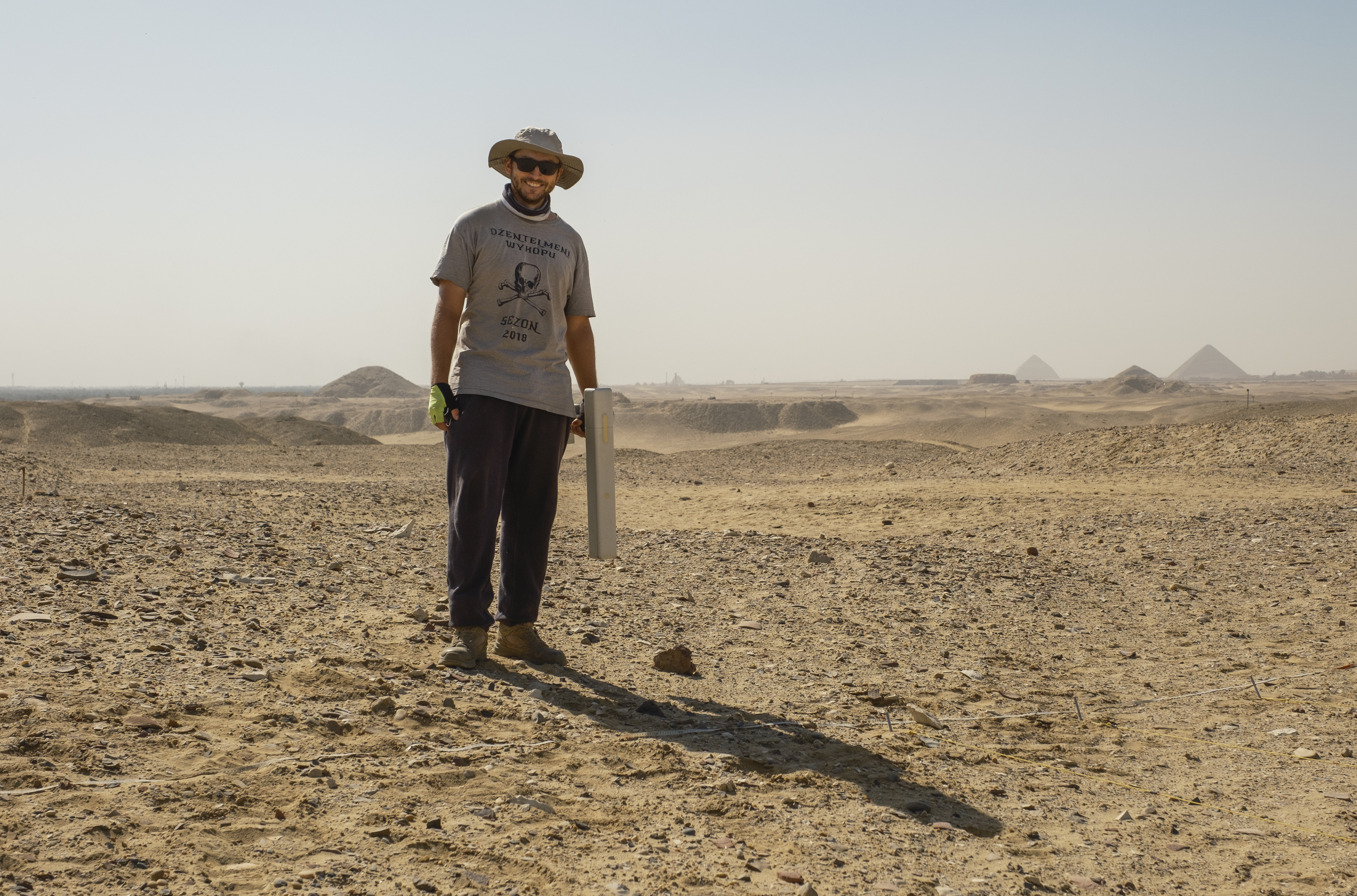 Measurements using the magnetic method require a lot of effort - the person carrying the instrument (Konrad Jurkowski - see fig. 3) walks a distance of 10 to 15 km a day. Traverses are marked on the surface with tapes and lines (each measurement must have precisely defined coordinates in the x and y axes). The effort put into the measurements is rewarded with the moment when - after transmitting the measurements to the computer - we see a map showing structures invisible on the surface (see the magnetic map (fig. 4)). The aim of our research is to discover the boundaries of the necropolis and, if possible, its plan. We also want a more detailed picture of the part of the necropolis investigated by the Mathieson mission. We look forward to seeing you next Friday for a new digging diary!