On the 15th of October, we started the fieldwork of our research project that aims to study the contribution of Egyptian workmen in archaeology on the occasion of celebrating the 50th anniversary of the mission. Our work on this project is a little dream of ours coming true. In May 2020, we (Fatma and Ashraquet) launched a campaign entitled “Hands that excavated a civilization” by Ashraquet Bastawrous on our page “The Place and the People” where we aimed to shed light on the legacy of the Egyptian workmen in archaeological excavations through a holistic approach. Here in Saqqara, we have the wonderful opportunity to take our work to a deeper level of research while connecting it to the history of the Leiden-Turin expedition and its significant work through its long history since 1975.

Our project’s methodology relies on the study and documentation of all possible resources including library and archival research on the one hand and interviews on the other hand. The review of previous research on the legacy of Egyptian workmen at archaeological excavations has been keenly taken into consideration.

We hence started a fantastic journey of research through interviews that began with the Rais (foreman) of the mission in the current season Hossam Azzam as well as workmen Raafat Abdel Karim, Mohamed Ragab, Youssef Hammady and many others. Our interviews began with our Rais Hossam Azzam who generously introduced us to all the details of the daily work of the workmen at the archaeological site.

In addition to interviews; our research has extended to research trips around the village of Saqqara in order to reconstruct the social context of the workmen’s daily lives. Wandering around the streets of Saqqara village created nice coincidences, for example, seeing Rais Ibrahim Abdel Monsif, Rais Mahrous El Behiery and others. During our interviews of the first three days, there was a name that we kept hearing several times “Antar Shadouf”, we went on with our work but his name kept being repeated and we decided to trace that name. From our first three working days, we were already overwhelmed by the huge amount of the data we gathered and started to analyzed to the degree that the first outcome of our history project began to be in shape.

Tuesday, Oct 18th, was one of the major highlights of our field visits when we went to Ezbet El Saaida to finally meet Rais Antar Shadouf. Our words cannot describe how it was to see in real life the retired Rais (foreman), the person we saw only in photos as a young man working with missions in Saqqara and thought impossible to see in person. Listening to him while he was telling us about his old days as a Rais with his eyes sparkling going through his memories with his colleagues, workmen and directors was very touching. 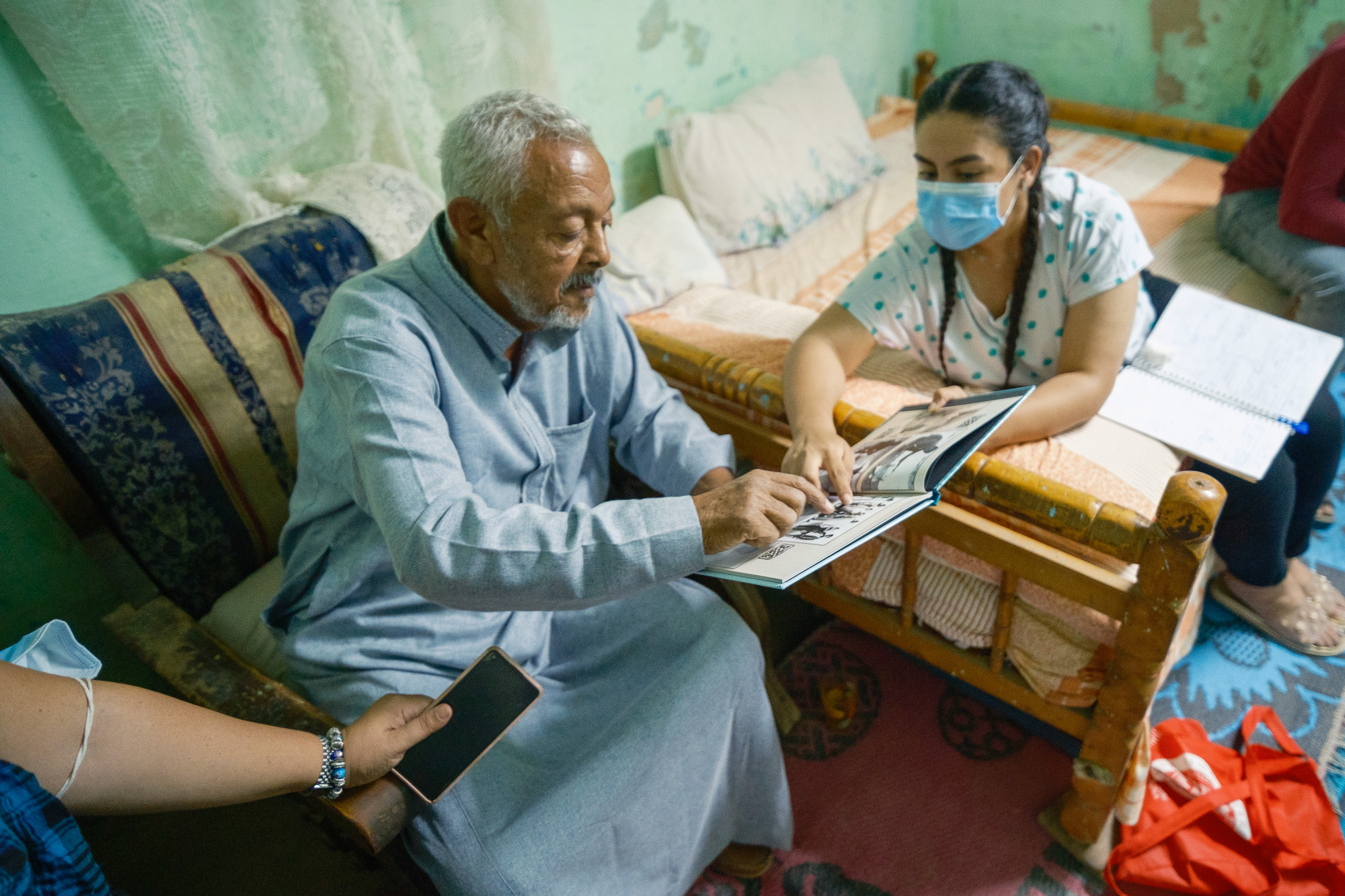 Caption: Rais Antar Shadouf  showing us photos of his family members who came from Quft and worked with archaeological missions in Saqqara.

That visit wasn’t the only visit we had; other house visits were also conducted to complement the gathering of our project data.
Our work wouldn’t have been completed without the help of the workmen and foremen who proudly shared with us their work achievements, education and different moments of their life.
We feel huge appreciation for all those workmen who gave us some of their time, welcomed us in their homes and showed us parts of their soul sharing their memories – both good and bad- with us. 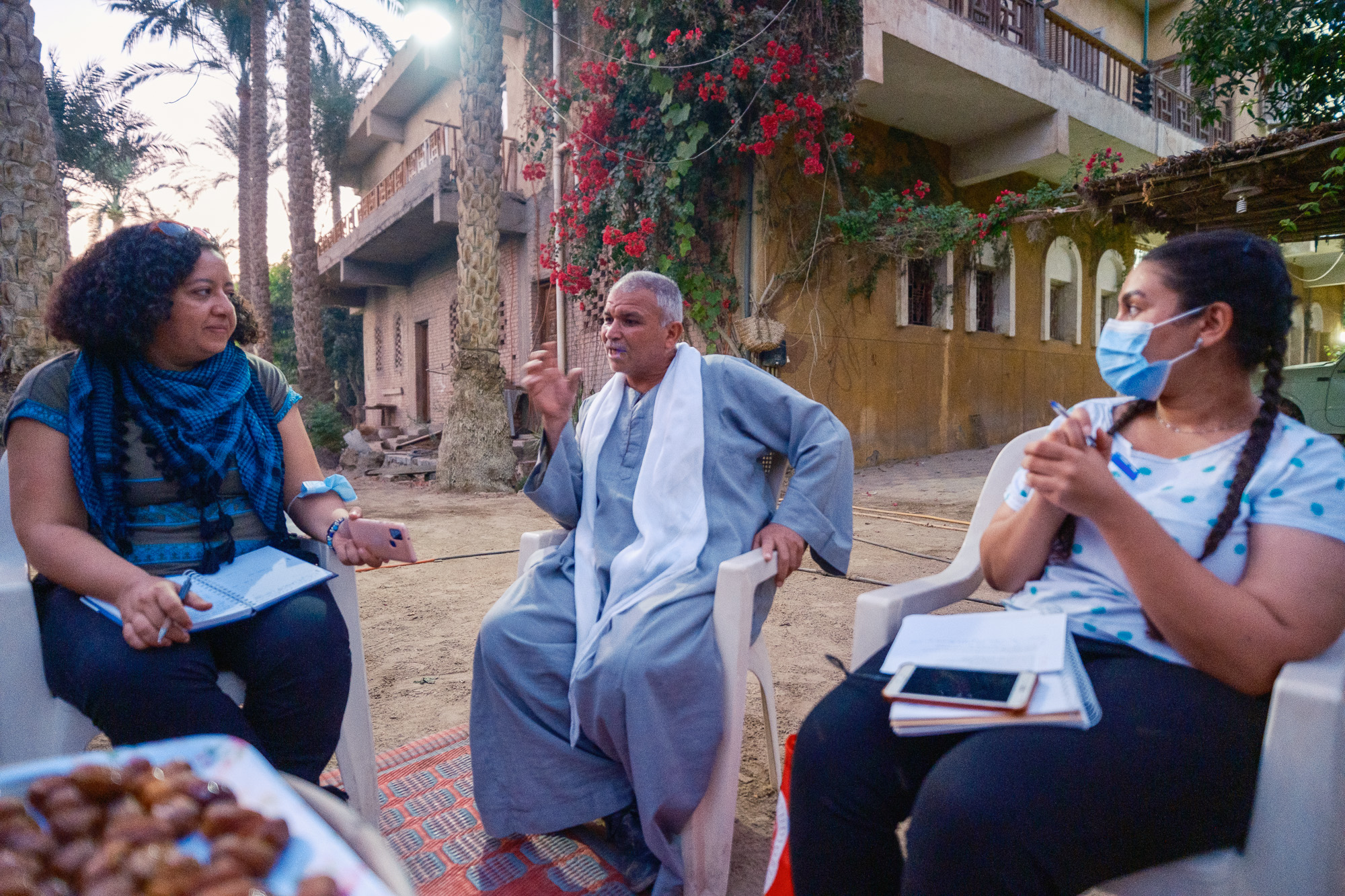 One of the main outcome products of the research undertaken by Fatma and Ashraquet is a short movie about the workmen, which we will present at different venues, starting March 2023. We aim to truthfully portray the lives and work of the men by means of interviews, live footage of the dig in Saqqara and by introducing historical documents about their heritage. Oral history plays a large part in their tradition and luckily we could speak with some of the great raises and record their memories. Some of them will appear in the movies and tell their stories, while we will also show how the work of the modern workmen and Rais have developed.

On a personal note I would like to say that I have discovered how wonderful it is to listen to the Arabic language. I have been to Egypt several times, but I have always shied away from learning the language. This may change. This past week I have been interviewing the workmen and the raises with Fatma and Ashraquet, and I have come to appreciate its tone and melody very much. Fortunately, they also act as interpreters, so I can concentrate on filming while they do all the talking. I could not make this film without them! They also make sure that the perspective of the film remains true to the Egyptian culture. This is something that we, the history team, and the people from the Leiden-Turin Mission find very important. We have almost finished filming and will soon start editing. We hope that you will all be able to see the film at some time and place next year. For now, I would like to thank Ashraquet and Fatma for their wonderful cooperation, and all the workmen for allowing them to be part of their lives and work. 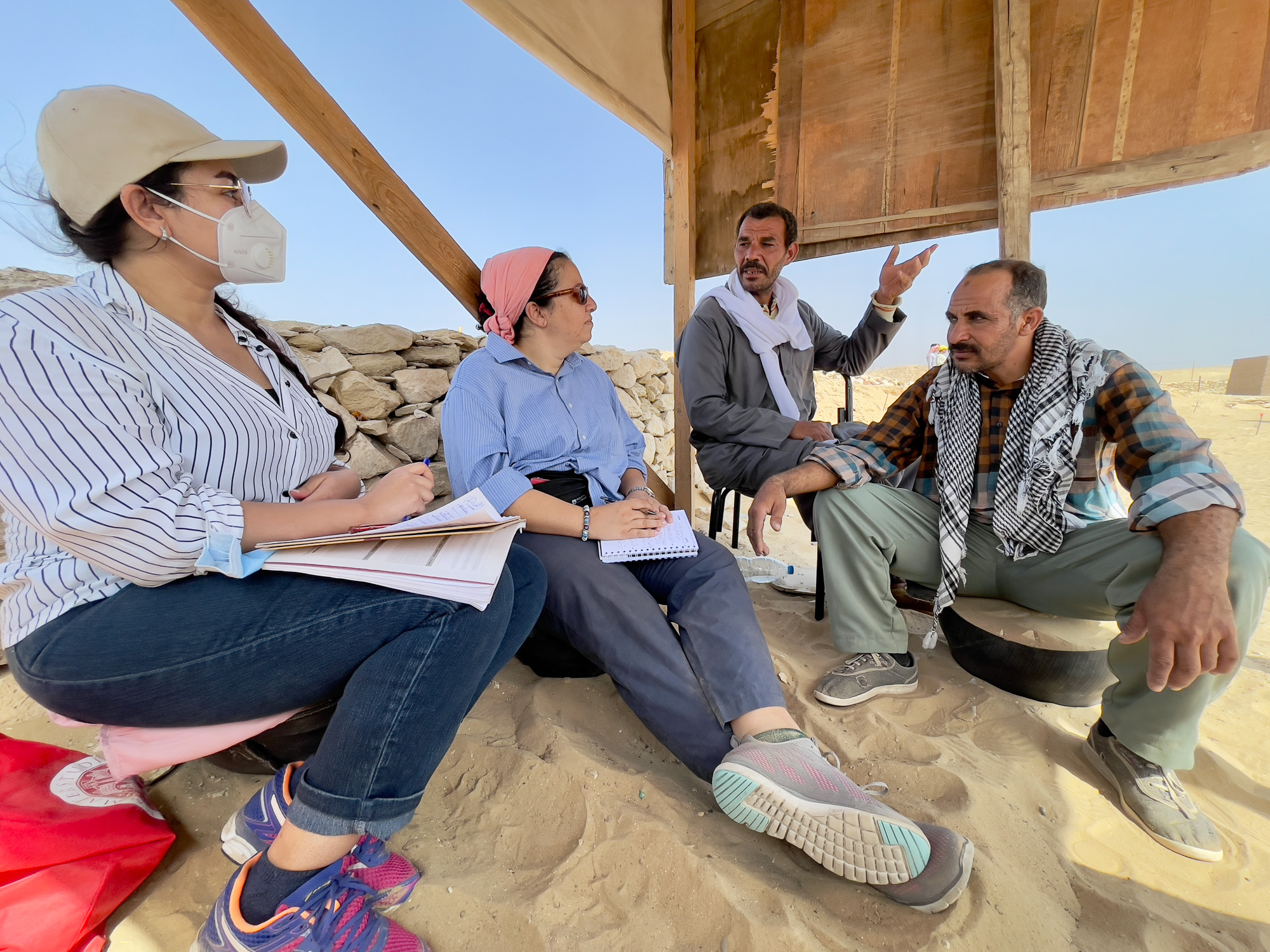 Explore "The place and the people" HERE

Click HERE to read the arabic translation of the Digging Diary.

This project was kindly co-funded by a generous grant of the impact funds of the Faculty of Humanities, Leiden University.